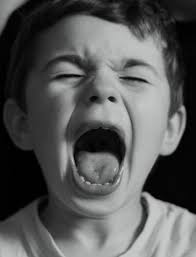 As I mentioned before, one of my objectives for the summer has been to complete a first draft of a novel. Make that my weird Jewish, sci-fi, teenage parable. So I was cruising along, having outlined and then fleshing out first part one, then part two, and then got 3000-ish words into part three…when I realized that part three didn’t belong in this book! Yikes. Now I’m trying to decide just what is the real part three that belongs to this book.
I’m not entirely stuck–I’ve added additional materials to part one and two this week (including some borrowed from the now-defunct part three)–and have worked on another couple writing projects, to boot. However, I’m starting to fear I will not finish by Labor Day. I’m starting to fear I will never finish. (Insert image here of me imitating the little boy in the photo at the top of this post.)
I need to decide where I want to go with this book, but the idea of being stuck is giving me such anxiety that I think it’s actually making me more stuck. Usually, I’m not the writer’s block type…but this might be it.
I’m going to go practice some deep breathing now…