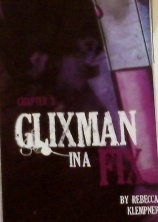 So, if all goes as planned, I will — G-d willing! — finish my serial (again…but that’s a whole ‘nother story) by the end of next week.

I’m a little freaked out about re-reading the whole serial after wrapping up all fifty episodes of Glixman in a Fix. Writing each episode of the serial just a month ahead of its publication definitely did some damage. As I’ve mentioned before, once thousands of people have read something, you can’t take it back, even if you wish you could.

On Sunday, I finally finished Sol Stein’s Stein on Writing, and one of the things he said near the end really got me, because it’s exactly what I feel I wasn’t able to do because of the method in which I published my serial. Stein mentions that you should establish credibility in fiction by planting the seeds early for later details to grow from. This diminishes the appearance of coincidence and deus ex machina by offering hints for later events, so when they do appear, they feel logical and natural. The characters’ actions will appear sufficiently motivated. If you didn’t accomplish this the first time around, Stein suggests that you sow these seeds when you revise your manuscript.

And here’s my problemo: I didn’t get to revise my story, knowing the whole shape of the story through its conclusion, before my audience read it.

While I did plant some seeds in my early chapters so I could benefit from them at this stage, there are many things that developed as I wrote which sprung from no seed, or from such a small one, that I’m afraid no one really will believe the conclusion when it appears. I keep wishing I could rewind to a time when no one had yet seen any of my story, and then go black and drop some hints into those early chapters as strategic points — which is basically what I would have done had I been writing a novel, and not a serial.

There are a few weeds back there, too, in the first half of the book, areas which I had hoped to develop, but which went largely by the wayside as time passed. I wish I could cut those out.

Have you ever read a serial or novel and thought, “Where did that come from?” Were you annoyed, unconvinced, or did you just shrug it off? Please share your thoughts in the comments.

9 thoughts on “Approaching the runway for landing: Winding up my serial with excitement and regret”