Some of my regular readers might notice that my usual response to frustration in the midst of a writing project is to start borrowing writing books from the library and systematically going through them (in addition to eating chocolate, cleaning, and spending too much time on Facebook as an avoidance strategy). 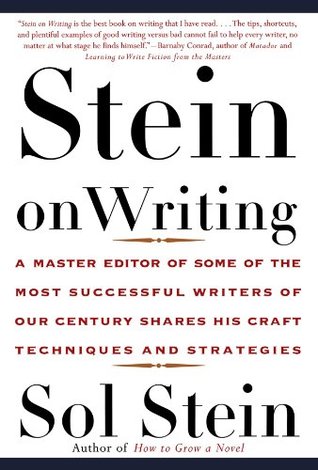 I’m two volumes into my current stack of five. The last couple of days, I’ve been reading Stein on Writing, written by novelist, playwright, and editor extraordinaire, Sol Stein. It’s not a new book, but it’s a classic, and I picked it up due to the acclaim.

I’m not done yet, but I’m just loving this book. It’s much more practical than most of the writing books I’ve read, which tend toward the touchy-feely, and after 50 pages of familiar (but articulate) ground (which I probably could use a review of anyway), Stein starts describing all sorts of new strategies for writers to employ.

My favorite one, thus far, is “The Actors Studio Method for Developing Drama in Plots.” I’ve posted a couple times so far about developing empathy in order to both be a better writer and to be a better person. This writing strategy creates deep characterization based on empathy while simultaneously establishing an enormous clash of wills. As an added bonus, it creates scenes that are startlingly life-like.

Sol Stein had a gig back in 1957 as a playwright-in-residence with the Actors Studio in New York City. At a workshop run by Elia Kazan, Stein and another playwright, Rhonda Jaffe, were selected to create an improvised scene in front of other participants.

Kazan pulled Stein aside and whispered in his ear that his job was to play a prep school headmaster with a troublemaker that needed to be expelled. “No matter what, don’t let him back in school,” Kazan told him.

Then, Kazan pulled Jaffe aside and whispered in her ear.

As the scene played out, Stein was approached by Jaffe. She told him she was the mother of the student he wanted to expel. He said the child must go. She countered that her child was so intelligent, so well-behaved — he must be allowed to return to his teachers, his classmates.

Nope, Kazan repeated. The child had to be expelled. Under no circumstances could he allow that child to influence his peers to do wrong.

Back and forth they went, voices rising, tempers flaring. It was all very dramatic.

Stein later discovered that Kazan had told Jaffe that she was a loving mother whose intelligent, gentle child had been wrongly accused of mischief. Her son needed her to defend him! She should insist, no matter what, that he should be able to return to school.

Essentially, the two “actors” were operating based on two different scripts.

Pointing out that in real life, most sides of any argument believe they are in the right, Stein suggests employing this while writing dialogue between characters. Give each character in the scene their own “script.” Each should have a separate intention, a separate belief system in which they are in the right and the other character is entirely wrong. Write it out if it helps you, but at least think it through before sitting down at the computer or in front of your notebook. Picture each scene from the points of view of both characters in the confrontation.

I think this is just brilliant. It’s something the Robert McKee talks a bit about in story — that characters should have competing goals — but Stein’s explanation of how to employ this technique is, I think, far clearer.

Have you heard of this before? Have you tried it? If not, what do you think of this? I’d love to hear from you in the comments.