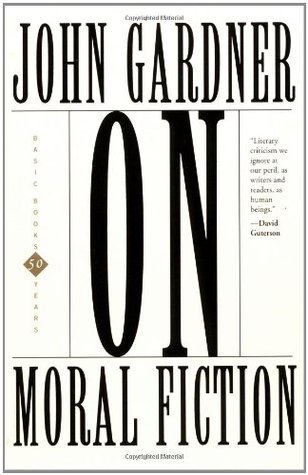 I’m only about three chapters in, and what strikes me most is how similar Gardner’s stance is to that of Rabbi Michel Twerski, the Milwaukee Rebbe. In an interview a few years back, Rav Twerski defined art as a creative process devoted to building people and society, in which there might be some destruction, but only if that destruction is necessary to the ultimate positive end of the project. This is pretty much Gardner’s position.

“The traditional view is that true art is moral: it seeks to improve life, not debase it.”

“…art builds; it never stands pat; it destroys only evil. If art destroys good, mistaking it for evil, then that art is false, an error; it requires denunciation.”

Gardner’s description of the artistic process also made me feel justified in something I told someone about my own process last week. Someone on Soferet (the frum writing/editing/translating forum) asked about fiction writer’s primary goals in writing. They wanted to know if we had a message in mind, if we wanted to entertain, or we wanted to inspire. This was my response:

If we’re talking fiction, my primary goal is usually none of those things.

Usually, there’s a story, buzzing around my head. The story generally has a nugget of truth in it – an idea, a reflection on human behavior, a value – but the set-up of the situation or the psychological make-up of the main character is what really speaks to me. If I don’t let it out, I feel a bit like I’m going nuts. It feels somewhat similar to having a great piece of news (your sister is expecting! your best friend is engaged! you got an acceptance letter from a publisher!) but no one is home
and your spouse (and your best friend and your mom and all your siblings) are not picking up their phones.

I guess what I’m saying is that my initial goal while writing fiction isn’t really the message or the entertainment or the inspiration (even though once I’m revising, those become more important than they start out) but the desire to get whatever is in my head into other people’s heads. It’s a desire to communicate.

I got some emails after that which pretty much endorsed my approach, but a couple of colleagues seemed concerned that my attention to messages and so on came only after my goal to tell a story from my heart.

Gardner insists that the world doesn’t need simple, cliche morality. People will rebel, he says, if we present obvious, heavy-handed, judgemental, 2-dimensional messages in the guise of literature. Here’s what he proposes “instead of teaching by authority and force, it explores, open-mindedly, to learn what it should teach.” He proposes we test values like we’d test a hypothesis.

“Art gropes,” he insists. “It talks like a hunter lost in the woods, listening to itself and to everything it, unsure of itself, waiting to pounce.” A few pages later, he adds,

“Art is as original and important as it is precisely because it does NOT start out with a clear knowledge of what it means to say.”

It is in the revision process, says Gardner, wherein messages, psychological insists, and so on become clear.

I’ll share more insights from this book after I finish it. In the meantime,

How do you define “moral art?” At what point in your creative process do you contemplate your work’s morality, if at all?

10 thoughts on “What I’m Reading Right Now: On Moral Fiction”