I was feeling a little cranky earlier today. Okay–more than a little. I’ve hit the point in a particular revision which I’m working on when I have to start writing new material, not just tidying up what was previously written. And I found out this morning that a program which wants to reprint one of my books will be doing so *at least* another year in the future (I was informed I’d made their list a year ago). The program comes with a stipend for authors, and I would love to receive my cash sooner rather than later.

Anyway, last week, I’d noticed that the sales of my first book, A Dozen Daisies for Raizy, had gone up. The book takes place on the day before the holiday of Shavuos, which I figured was boosting sales. I also tried to work a little social media muscle to make sure people knew the book was back in print and how to reach it. I decided at about noon today to check where sales are at THIS week. END_OF_DOCUMENT_TOKEN_TO_BE_REPLACED

As usual, my absence on this blog means I’ve been busy someplace else. While I’ve been getting feedback on the novel I finished a couple months back, and digesting it, I’ve been completing revisions for Menucha Publishing on the novel I wrote for NaNoWriMo. (I’ve also been brainstorming new titles — the working title was unpopular, to say the least.) G-d-willing, that book will be out later this year. And I also revised and created a new cover for my book, Mazal’s Luck Runs Out. I decided the old one wasn’t engaging enough, so I put a girl on the cover who could pass for Mazal looking right at the viewer. I think it makes a big difference. What do you think?

And, of course, there was Purim…and Pesach.

Anyway, I’ve got some goals for the next few months. END_OF_DOCUMENT_TOKEN_TO_BE_REPLACED

As usual, I have lots of good excuses for going missing on this blog. I completed my manuscript for NaNoWriMo, then immediately started work on some short stories…and THEN I started working on *another* novel, which I am hoping will hit the 50,000 word mark (G-d willing!) by the end of this week.

Many of my FB friends, family, and colleagues know I’ve been slowly shifting my writing away from venues which don’t include images of women or older girls. That means I’ve had to find new publications to publish my short stories, which used to appear primarily in Binah and Hamodia. Recently, I had a second piece appear on Hevria, and now I’m privileged to be the first fiction writer featured in the new women’s magazine, The Layers Project Magazine. My story featured there is entitled, “Taking the Plunge.”

One of the perks about this switch of venue is that I get to talk about all sorts of topics not usually covered in Haredi magazines. Even though a lot of my writing is for children, the two stories I link to above are for readers 16 years old and up.

While the piece on Hevria is free, to read the second story, you have to pay a subscription. The Layers Project Magazine would like to be able to pay its writers and staff, and so just like the print mags charge a fee for you to buy them, they are asking for a subscription. For a month, it’s $5.99 for unlimited access, and you get three free articles without subscribing. However, if you consider it’s a replacement for four issues of Binah or Mishpacha‘s Family First, or the like, it’s a cheaper option. (UPDATE: Accessing the story “Taking the Plunge” is now free!)

The Good News: I’m posting at my regular Wednesday time!

The Bad News: I skipped the last two weeks, even though Passover was over.

The Good News: Glixman in a Fix is officially for sale! END_OF_DOCUMENT_TOKEN_TO_BE_REPLACED

So, I’ve got a half-hour to carpool and a ton on my plate, but it occurs to me that I haven’t shared several recent developments in my professional life that are kinda exciting. In no particular order:

I’d love feedback on any of those happenings!

Last week, The Jewish Home L.A. published my book review of Tehilla Edelman’s new anthology about depression and anxiety disorders in the Orthodox world, Calling Out to You. 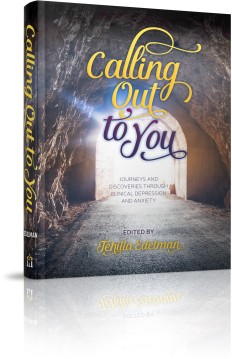 Calling Out to You

Not only is the book an amazing resource for observant Jews with mental illness, but it’s also essential reading for their rabbis, principals, therapists, family, and friends. The format is innovative as it contains not only articles about treating depression, OCD, and the like, but also poems and narratives written by patients themselves. Highly recommended.