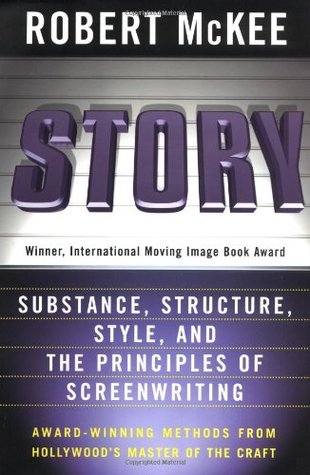 “But it’s about screenwriting!” I said.

Story, by Robert McKee is a book that has come up again and again with my writing friends. A colleague even coached me in some of McKee’s techniques. And I’ve recommended it to random people in the library looking for books on screenwriting. But it was not something I’d ever actually read.

I think my block was this: I’m not planning to write a movie. I haven’t even seen one in a theater for (it’s now official!) ten years. Why would I read a book about screenwriting?

After listening to so many novelists and other writers praise the book, I finally decided to read Story.

One of the issues that came up in the bit I read today was about the conventions of genre. END_OF_DOCUMENT_TOKEN_TO_BE_REPLACED

Mark Oppenheimer, in last Friday’s New York Times, posited that the optimistic attitude embraced by Mormons has prevented them from creating literary fiction. Sure, they have succeeded in Sci-fi (Orson Scott Card), fantasy (Stephanie Meyer), and books for teens and children (Shannon Hale, James Dashner, J. Lloyd Morgan).  But how many Mormon writer’s have won Pulitzers, National Book Awards, Bookers, or Nobels?

Oppenheimer interviewed a number of Mormon writers for his article, and includes some interesting insights:

“It is a fair thing to point out,” said Shannon Hale, a Mormon who writes young adult fiction, “that there have been very prominent Jewish writers that have received a lot of accolades, and worldwide the number of Mormons are comparable to the number of Jews, so why hasn’t that happened?”

Ms. Hale’s theory is that literary fiction tends to exalt the tragic, or the gloomy, while Mormon culture prefers the sunny and optimistic.

“I’ll tell you why they write young adult,” said Ms. Nunes. “Because they don’t have to write the pages and pages of sex. They don’t want to spend a lot of time in the bedroom.”

Another author pointed out that since Mormon theology strongly identifies with the idea of a Messianic redemption, Mormon writers gravitate towards the “savior motif.”

This all got me thinking. Even though Ms. Hale correctly identified Jews as successful authors of literary fiction, Orthodox writers are not foremost among them (despite examples of some who are, like Ruchama King Feuerman and Risa Miller and even, I’d argue, Bracha Rosman and Henye Meyers). And guess what? END_OF_DOCUMENT_TOKEN_TO_BE_REPLACED

Within 30 seconds, I decided that I couldn’t and wouldn’t read the book. END_OF_DOCUMENT_TOKEN_TO_BE_REPLACED

Be careful! If this guy throws down the gauntlet, it’ll probably hurt.

So yesterday I read this post by the Rubber Ducky Copywriter. In it, she posts about her first rejection letter after going out on a limb and submitting a short story. Despite her success as a copywriter, fiction is a new endeavor for her, and rejection hurt.

First of all, I’d like to cheer her on. Despite the rejection letter (and my readers will know I’m no stranger to them), the Rubber Ducky Copywriter did something a lot of us writers don’t do: try something new.

A lot of us avoid writing new things, especially after we find success (especially financial) in a particular niche. I know that it took me a long time to start writing for adults after I’d succeeded with kids’ lit. Other changes were also scary, because they carry risk. What if you invest time and emotions and no one ever publishes it?

But the pay-off can be big.

For years, I focused on my fiction. When I ventured on occasion to write a personal essay, it would inevitably face a quick rejection. Out of frustration, I gave up writing personal essays for a long time.

But, when I came back to it, I did better. My years of practicing fiction helped me hone my storytelling abilities. The first personal essay I’ve had published shows this and found a much wider audience than my fiction thus far has.

So the folktale project turned out to be an eye-opening experience for me.

Am I a writer, or a barber?

When I first started writing for kids, I didn’t really understand the difference between short stories and picture books. I’d submit short stories to book publishers, and picture books to magazines who published short stories. Selling Raizy and being guided through revisions by Devorah Leah Rosenfeld, the editor at Hachai, schooled me in the differences between the two media. After a couple years, I started writing regularly for children’s magazines, and her lessons allowed me to jump between the two formats.

1) The length differs significantly in the two formats. Oddly, an entire picture book has about half the words (sometimes less) as a short story for a kids’ magazine.

2) The illustrations in a picture book replace almost all the description. And the only words that could appear in a picture book text are ones that drive the narrative forward. When I learned this lesson, my picture book writing attained a sharpness that it had previously lacked.